What Gives You the White of Way? How Seattle Public Schools Educators of Color Are Fighting Back

That picture tricked you into thinking this was going to be a fun post. Ha!

As Teacher of the Year, I was invited to speak at an awards ceremony called Schools of Distinction for my educational service district. The schools were chosen according to how well they have improved their standardized test scores on the Smarter Balance Test (SBA) over a period of the past five years for math and English language arts (ELA). Before I accepted this opportunity I made sure that I could use my time to speak on any topic.

In case you are just now joining me on this blog, I am wholly opposed to standardized tests in any form.

I started by opening my keynote reading the entire text of Ibram X. Kendi’s article, Why the Achievement Gap is a Racist Idea. You can read it here. Below is the rest of my speech I put together based on data about the schools being honored at the event.

I start with that [article] because I realize that we’re here to honor schools who have improved testing scores, and in my district when I go to professional development about this topic they say, “Where do you find that in the data?” That question is mostly directed toward people who try to challenge standardized testing. So, I’m going to show you where I find [how the achievement gap is a racist idea] in the data.

The top bar shows the overall racial demographics of students in the State of Washington. If we look at the schools that have been selected, we can see which racial category was the dominant category in schools chosen as Schools of Distinction. We can see that the majority of schools chosen are predominantly white schools. I want to quote Ibram X. Kendi, “Standardized tests have become the most racist weapon ever devised to objectively degrade Black minds and legally exclude their bodies.” This is shown in the data. The only place we see that has a predominantly Black population is high schools. No other schools that have predominantly Black populations have been selected, or the percentage was lower than 1% so it doesn’t show up on the graph.

I went through all the schools selected [there were 91 across the State] and I found out which schools have majority student of color populations, because in those schools we should see that those students of color have improved or are doing really great. I’m going to focus on elementary schools because they have the most complete data. In high school lots of kids opt out of testing, thank goodness.

Here are schools that are majority Latinx schools; their ELA and math SBA scores. 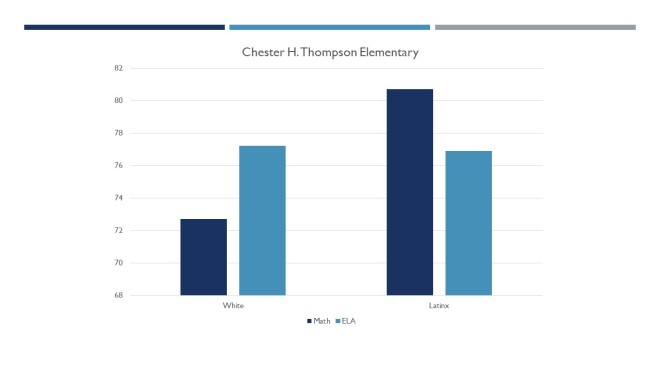 This is the only school being recognized tonight across the state where the students of color are performing at the same level or higher than their white and Asian peers on their SBA test scores. The only one! And that’s for any racial group. That caught my interest of course, so I went on Google and Googled up Chester H. Thompson Elementary. I discovered that they have a dual language immersion program! These kids are learning their culture. Their culture and language are being valued in their school. That’s why they’re doing better!

Now, remember. These are the schools where the Latinx kids are the majority. 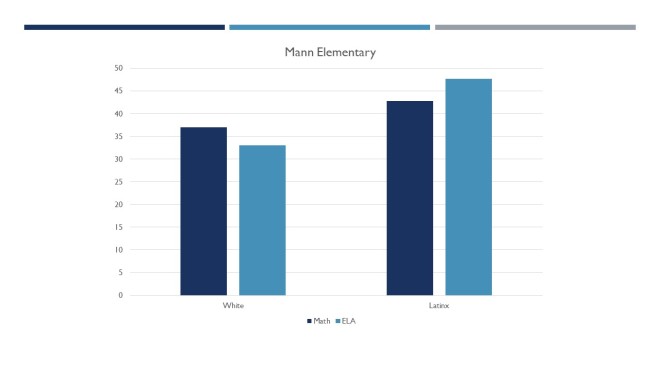 This one looks promising until you look at the measurement. That top bar is only 50%, so even though at this school the Latinx kids are doing better than the white kids, they’re still underperforming compared to their white and Asian peers across the State.

Then I went and found the two majority Black elementary schools, both in Seattle Public Schools. 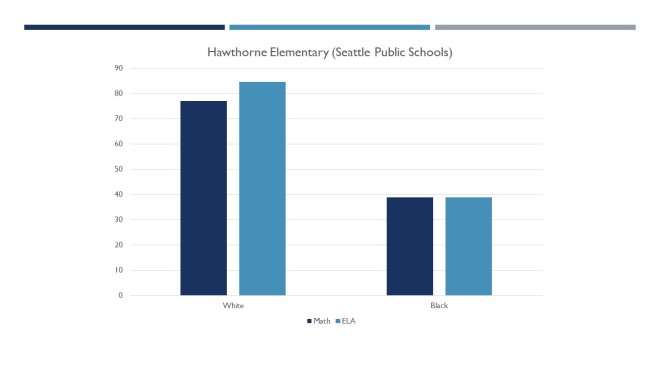 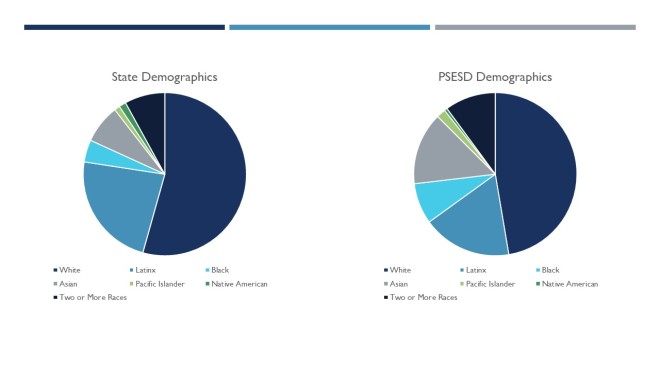 These are the demographics for the state for ethnic and racial categories on the left. On the right are the demographics for our region. I wanted to put this up here to show that in our region, we have the most diverse student population in the State. This issue is an imperative in the State, but this data shows it’s even more of an imperative for us in Puget Sound Educational Service District.

I know this is a celebration and I thought long and hard about what I was going to talk about when I came here, but my responsibility is to the babies. When we’re failing them we can’t celebrate.

As a Mexican-American woman, when I hear “standardization,” I hear “assimilation.” Standardized testing upholds Whiteness as the ideal. We are forcing our kids of color into white holes they don’t fit in. They are shoved into these holes kicking and screaming. This is why discipline rates are off the charts for kids of color; because they’re not being valued in the classroom.

“The beauty of the world lies in the diversity of its people.” That doesn’t just apply to skin color, or religion, or gender. This applies to ways of knowing, learning, and being in the world. Standardized testing doesn’t allow for that. Until we stop toxic testing, our kids of color will never succeed.